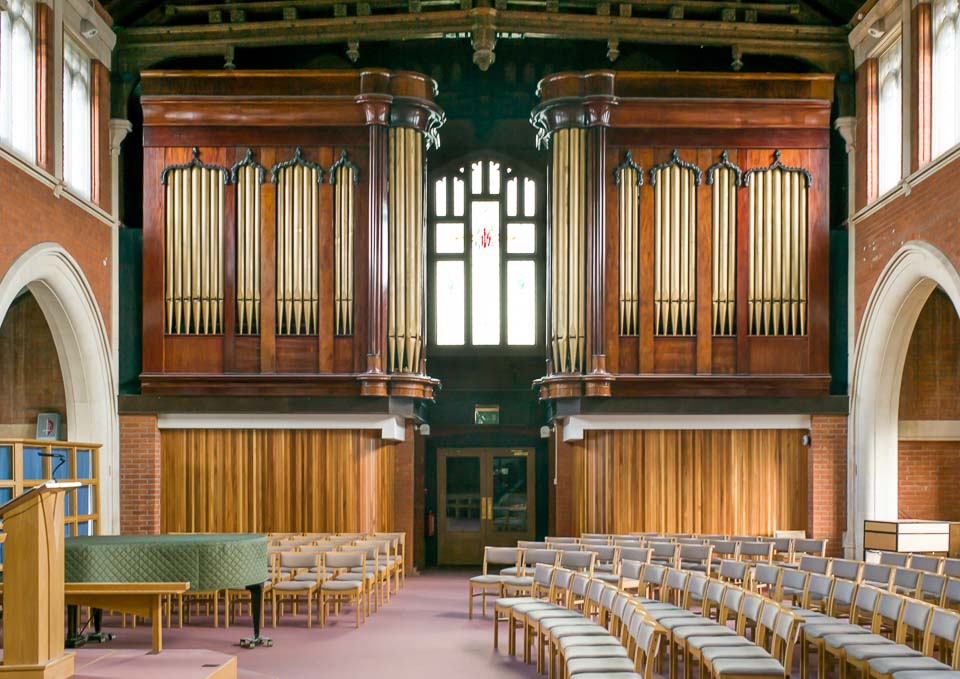 How the organ came to Wesley

During the refurbishment of Wesley Church that was completed in 1990 a rebuilt historic 52-stop, 3 manual William Hill organ of 1844 was installed.

The church`s existing organ, a 25-stop 3 manual instrument, much modified by several organ builders over the years, was in a chancel organ chamber which prevented it speaking effectively to the nave congregation and the instrument was needing attention.

With the introduction of the William Hill organ and the removal of the organ chamber during the refurbishment, this organ was dismantled for reuse in other instruments, two of its ranks being added to the new organ.

The William Hill organ was designed for Eastbrook Chapel, Bradford, where it was dedicated in 1845 and served this large rectangular chapel for half a century. When this building was demolished and replaced by the magnificent Eastbrook Hall, the organ followed and was rededicated there in 1904.

When Eastbrook Hall closed in the 1980`s, this fine historic Methodist organ was at risk (a similar magnificent William Hill organ at Great George Street chapel in Liverpool was vandalised almost as soon as that Congregational church closed in the 1970`s).

Owing to the great energy of the Rev. Dr. Ivor Jones (then Principal of Wesley House) and George Dobinson (organist of Wesley Church), and the generosity of the members of Eastbrook Hall the organ was promptly dismantled and put into storage by Messrs F.H.Browne and Sons, organ builders of Canterbury, led by Gordon Chapman. A strange coincidence was that he had known and played this organ as a boy in Bradford and was now to be the architect of its restoration.

The organ was restored, rebuilt and installed in place of the former “East End” gallery of the nave and played from a fine mobile console, which came to Wesley Church from just down the road at Emmanuel College when they dismantled their existing organ and installed a new tracker instrument by Kenneth Jones in 1988. In this gallery position at Wesley, the organ speaks freely throughout the nave.

The refurbished church held a rededication service on 17th March 1990 and the partially completed organ was used during this: after the main service, Gordon Chapman gave a history of this much loved and travelled organ and a short recital.

The finally completed instrument was dedicated a year later at an organ recital by Christopher Robinson and its comprehensive tonal resources were splendidly displayed and admired.

Since then the organ has been a major contributor to many concerts as well as more traditional organ recitals. Organists playing at these have included Ivor Jones, Martin Neary, Timothy Bond and Carl Rutti.

Not all events are solemn affairs, however. One memorable concert featured Anne Page and Ian de Massini dressed in Wagnerian costumes with magnificent horned helmets playing an organ duet arrangement of “The Ride of the Valkyries”. At another, an American organist played an unforgettable version of “Chattanooga choo choo”.

The instrument has been widely used for choral events by local choirs and choral societies. Wesley Church has been used by the Cambridge University Musical Society and at the church they gave a memorable performance of Rossini`s “Petite Messe Solennelle”.

Besides local visitors, including Choral Evensong by King`s College Choir during the Wesley Centenary year, concerts have been given by choirs from further afield, including Ireland, USA, Germany, Russia, Australia and Finland. John Rutter directed a “Come and Sing” day during the Church centenary celebrations and the Association of British Choral Conductors has held several similar events, using the organ to great effect. 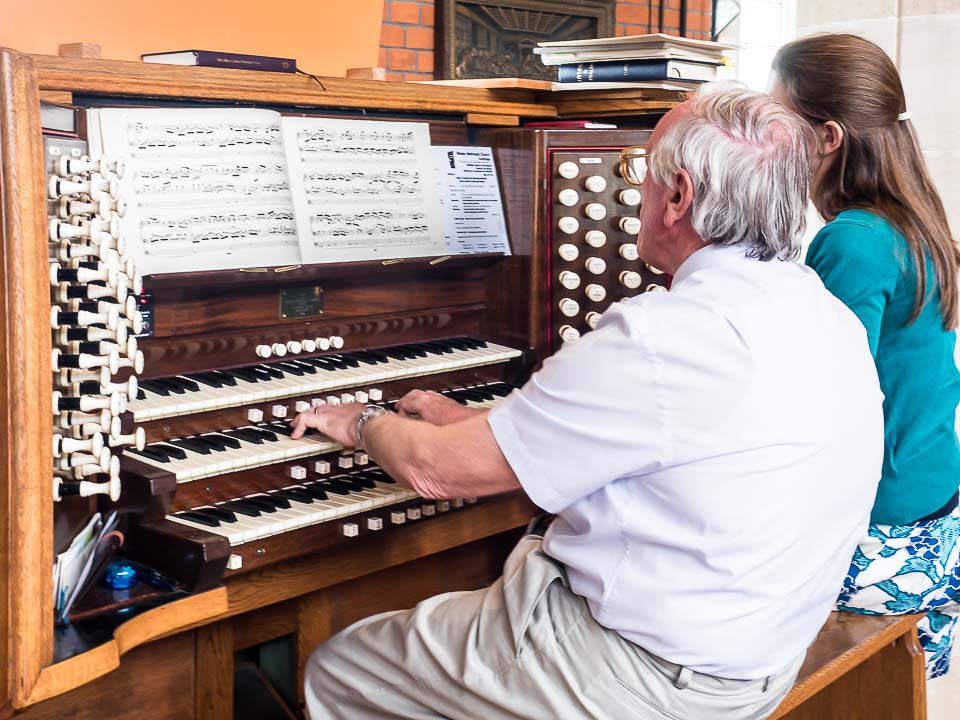 Because the instrument has a mobile console where a piano and seating can be arranged very close by, the organ is very popular for use in organists` workshops, masterclasses, group teaching and visits by organists` associations, when all members who wish have a chance to play the organ. This arrangement also enables organ piano duets to be performed. The organ is often a concert venue during the annual Cambridge Summer Festival. It is always a great pleasure to have children and young people playing the instrument and especially when our students in MethSoc play for services on occasion.

Although we at Wesley are blessed to have a “concert standard” organ and to enjoy the concerts that it supports, it is most prized for its contribution to our regular Methodist worship. Its wonderful sounds have been heard in this way since 1845 and its voice continues to be at the service of our glorious Methodist Hymnody.

The early history of the organ

This history is based on an article originally printed in the Methodist Recorder.

After the rededication service on 17th March 1990 at Wesley Church Gordon Chapman of F.H.Browne Sons, Organ Builders of Canterbury, gave a personal history of the organ and this is transcribed below: 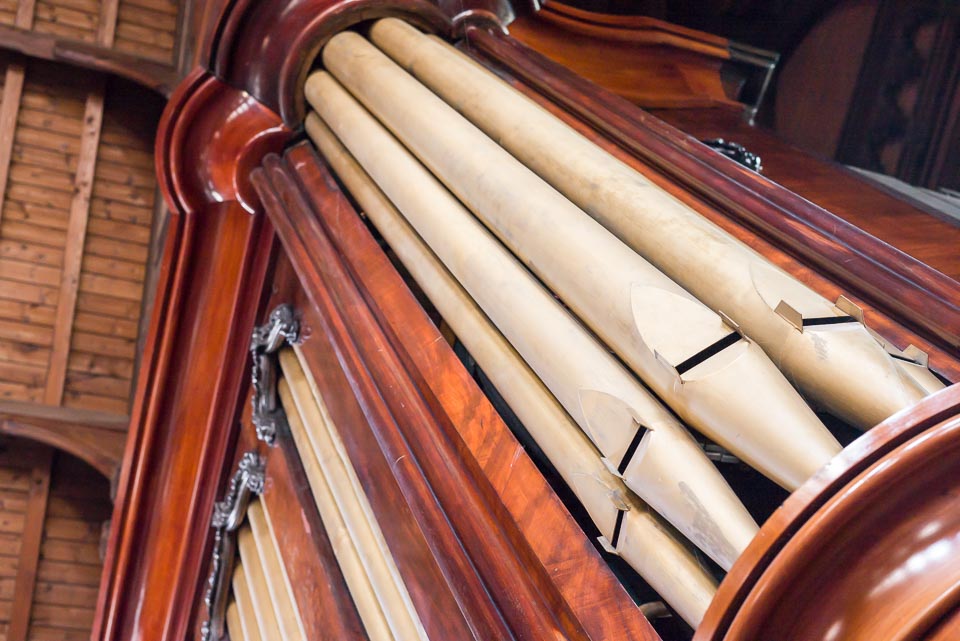 I must confess that my acquaintance with this organ goes back more than fifty years. I used to accompany my father when he went to address the Sunday afternoon Men`s Brotherhood in the Eastbrook Hall. I would be smuggled up on the rostrum with the Stewards and “High Heidyins” and hidden at the back behind all these august figures.

I shall always remember the sound of the singing – the combination of hundreds of north-country men`s voices and “the sumptuous rich roll” of the mighty instrument behind, which towered up to the roof. How I envied the bald-headed deity who was privileged to have his hands on such a monster!

Later I met Mr Oliver Knapton, who played the instrument for fifty years from 1902, and was allowed to sit beside him on the stool, and later – when I started to learn the organ – to “have a go” after the meeting.

And then something terrible happened! Just before the War – it must have been about 1938 – Mr Knapton acquired a motor car, and after the meeting he became more concerned about going off for a drive than hanging about waiting for me to have my go. To prefer the delights of a travelling tin can before this gold and mahogany creature seemed to my youthful eyes to represent a considerable falling from grace.

The Eastbrook Hall was a handsome octagonal room which looked as though it had been specifically designed to display the organ. The organ had, of course, been designed for the original Eastbrook Chapel, a traditional building with galleries all round, and the organ stood in the gallery behind the pulpit. The church must have been of some size as the case work that we see in Wesley Church today, stood on approximately six feet of panelling which accommodated the console.

The first organ in a Methodist Church was that built for Brunswick Chapel, Leeds in 1828. In following this example, the Trustees at Bradford, whose building was already twenty years old, selected the most eminent organ builder of the day to build their instrument – presumably on the principle that “nowt but t`best were good enough for Bradford!

William Hill`s organ building antecedents go back to John Snetzler – a famous German organ builder who came to England in the middle of the eighteenth century after assisting Christian Muller on the construction of the world-famous organ at St Bavo`s Church Haarlem. Snetzler carried out work in Cambridge at Peterhouse and the old All Saints Church.

He was succeeded by his foreman, a Swede called Ohrmann, who subsequently took one Thomas Elliott on as a partner. Elliott built many notable instruments including those in Derby Cathedral and York Minster. His daughter Mary married a young employee named William Hill, whom Elliott took into partnership in 1825.

Elliott died in 1832 and Hill then carried on the business alone under his own name. He was later joined by his son Thomas, who continued to increase the reputation of the firm, and built amongst others the organs of King`s, Trinity and St. John`s Colleges in Cambridge. He in turn was succeeded by his son Dr Arthur George Hill who presided eminently over the firm until it merged with that of Norman & Beard of Norwich in 1916, which still exists.

To go back to the early nineteenth century, organs in Britain had at that time only rudimentary pedal departments. They consisted often of a single octave of pipes capable of producing only the simplest bass line.

However, Mendelssohn began to visit England in 1829 and introduced the organ works of J S Bach, and the need for an adequate pedal organ became evident. This, William Hill started to provide in his instruments, greatly encouraged by Dr Henry John Gauntlett. He was an amazing man who started life as a solicitor but eventually gave himself entirely to music. He was an organist and is reputed to have composed over 10,000 hymn tunes – several of which we still sing including the irreplaceable tunes “Once in Royal David`s City” and “Ye Choirs of New Jerusalem”. He was a staunch advocate of the design of organs on which the great classical repertoire could be realised, and William Hill, with his encouragement, built the important organs for Birmingham Town Hall in 1834 and for Great George Street Chapel, Liverpool in 1841. These were epoch making instruments with adequate full compass pedal departments capable of sustaining an independent part, and fully developed Swell Organs.

This organ, which shortly followed and closely resembled the Liverpool organ, is thus quite historic. It is ironic that in view of its virtues it should have been opened by Thomas Adams, a player of the old school whose accomplishments on the pedals were said to consist only of the occasional drone when his bunions were propitious.

Things took a turn for the worse later in the nineteenth century. Tastes changed in an atmosphere which combined unbounded confidence in the present with scant appreciation of the past. Mixtures were suppressed in favour of a preponderance of unison tone, which left the organ bereft of colour and liveliness and incapable of making a lot of sense of the historical organ repertoire. Many of the old instruments were altered out of all recognition by this zeal for improvement. Certainly the Eastbrook organ did not escape entirely, but happily the changes were not too extensive and much of the instrument remains as original. It is most gratifying to be able to report that in the present reconstruction the opportunity has been taken to restore the organ largely to its original specification.

A comparison of the 1844 and 1991 specifications of the organ