Why a new Window? 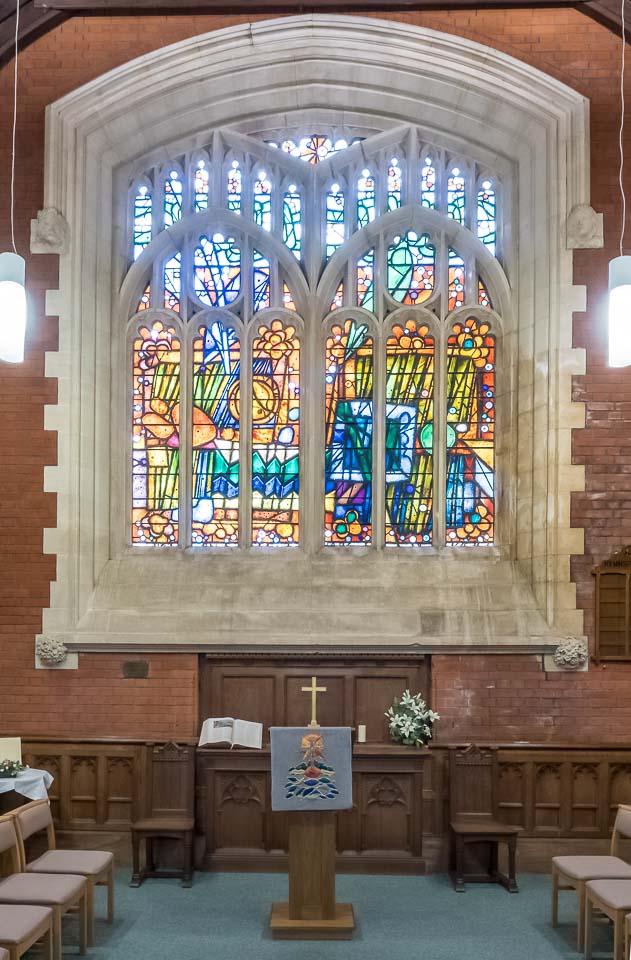 In 1960 Wesley received a bequest of £1,000 from the Rev. Herbert and Mrs. Gertrude Kirby to pay for a new window. Following Herbert`s retirement as a Methodist Minister the couple regularly worshipped at Wesley. The officers of the church decided to replace the original window in the choir stalls with something contemporary.

The minute books of the Trustees enable us to follow the story. In November 1960 a committee was set up to explore the possibilities available for the proposed window in the Church. It was, however, not until the Trustees Meeting in November 1963 that the Chairman of the meeting reported that the “Stained Glass Window Committee” had twice met in recent months, and had inspected various artists` work and also some windows in the neighbourhood. The committee had come to the conclusion that, as Mr. Keith New (one of the Coventry Cathedral artists) was himself interested in preparing some designs and having assured us that it would be possible to produce something worthwhile for the sum available, it would appear sensible to proceed on these lines. The existing sub-committee was re-appointed and empowered to negotiate with Mr. New.

Design of the new Window

In January 1964 Mr. Keith New visited Wesley and wrote his proposal for a design for the East Window.

“Almost the first idea that came to me standing in the nave considering the possibilities of the east window, was that I saw the window functioning mainly as a backcloth to the altar. It needed I felt an enrichment, warm in colour, that although containing a certain variety and contrast of form within itself, gave at the first glance the sensation of a tapestry effect, but with the brilliance of light passing through colour that is the essence of stained glass.

“In my conversations with Rev. Arthur Valle, it appeared a non-representational rather than a figurative treatment was favoured, and rationalising my previous feelings a little, I used these as a starting point.

“The east window of Wesley Church is divided into two sections by a heavy central mullion, the whole linked over by a flattened arch supported beneath by a line of repeating tracery lights, and this arrangement is the designer`s first discipline.

“The theme or meaning of the design is in the pattern of the forms themselves: their character is sensed and understood not by the intellect, but by an instantaneous visual response. The design can be called if you like a “religious decoration”, - religious because it respects and indeed springs from its unique situation. The architectural details of the window (cusps etc) are echoed in the design, falling as it does into main images, either side of the central mullion, with smaller forms moving across its surface. Other forms strike out into the tracery lights like banners against the sky: and the general feeling is one of joyfulness and exultation, with inner movements of quietness.

“Although rich in colour, deep yellow, burnished orange, touches of deep green, blue and purple; the intention is for a window medium in tone lightening to a pure white in the upper sections of the tracery. This aspect is important as the window is the only source of light in the chancel. A suggestion is that the side walls of the chancel be painted white, thereby picking up any colour thrown by the light coming through the window, besides giving this area a more spacious and lighter feeling.”

Decision on the new Window

A Special Meeting of the Trustees was held on 21st April 1964 when the Chairman explained that the meeting had been called to try to reach a decision with regard to the installation of the new stained glass window. It was also an opportunity to meet the window`s designer, Mr. Keith New, and to ask him any questions.

Mr. New elaborated on what he had written a few months earlier and said that the essence of stained glass windows is to get the effect of brilliance of light passing through colour – in fact a religious decoration. His design was not in any way symbolic, but an abstract design in which one`s imagination is allowed full play. He felt he had to break away from the more conventional designs of which you could find upwards of 2,000 in Great Britain. “You will not see another window like this one” he said. “It is modern and it is original”.

He was asked if there was any limitation in the colours of glass that can be used for stained glasswork and Mr. New replied “none whatever, In spite of what you may hear to the contrary,” he said “modern stained glass for windows is better in all respects than the glass used in medieval times”.

There were further questions and a discussion about painting the walls white which the Trustees agreed to defer until after the window was installed. Mr. New confirmed to the meeting that he could do the job within the figure of £1,000 allowed and that he would supervise the installation of the window himself. It would only take four or five days and should be ready by about the last week in October.

The proposition that Mr New be instructed to prepare the window in accordance with the displayed designed and be erected at the price already agreed was approved with just one abstention.

The Window in detail 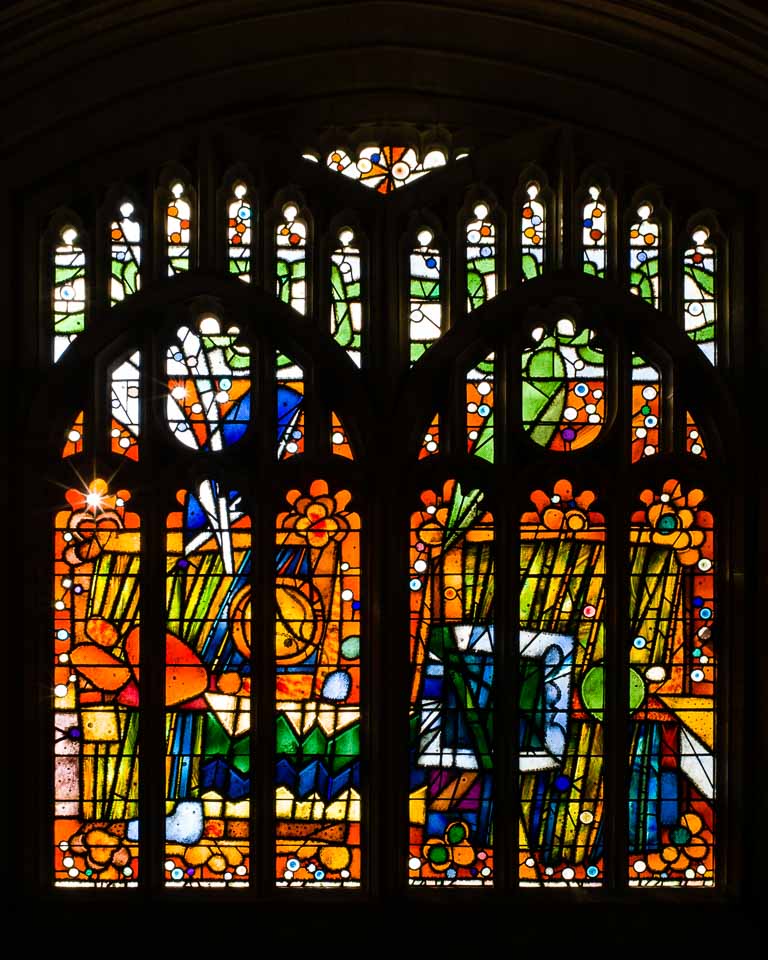 Keith New made this stained glass window in Summer 1964, following the Trustees` approval of his design in the April. It was installed in October in the then chancel/choir stalls, now the Little Chapel, following the major refurbishment of Wesley Church in 1990.

The window was designed to fit into the original stone tracery of the 1913 building. Mullions divide the window into sections for which the artist made six large panels and twenty-three smaller ones. Each small piece of glass had been individually cut, painted and fired: surrounded by lead they have been formed into panels, which were affixed to tie bars forming part of the overall design and are bedded into the masonry.

The main features of the window are:

Altogether this is a striking window where, in Keith New's own words: “the general feeling is one of joyfulness and exultation, with inner movements of quietness.”

The Golden Anniversary of its installation

On Sunday 19th October 2014 Wesley Church celebrated the golden anniversary of the installation of the Keith New Stained Glass window. The church was open all day to enable people to view the window and a small display was prepared. There was also the opportunity for tea and conversation with the artist`s two daughters as well as stained glass experts and historians, Dr. Robert Smith and Diana Coulter, who both knew Keith New at Kingston University, and to whom we are indebted for their assistance in preparing this short history.

The two researchers had visited the 2012 exhibition, “Journey into the Light”, held at Coventry Cathedral to mark its 50th anniversary since consecration, and in the train home the idea of celebrating Keith's work in stained glass took hold. A short paper written by them is included below.